Club 45 has recently expanded to include a new club. The RPG (Role-Playing Game) Club was initiated by one of our staff who was previously introduced to RPG and provided access to the games during the Winter Break. The children showed so much interest that it was decided that it should find a permanent home in Club 45.

RPG strives to teach kids how to work on collaborative problem solving skills in a fun environment. Role playing games teach confidence, leadership, and cooperation while showing the consequences of your actions.

Dungeons and Dragons is the RPG that was chosen for Club 45. It encourages the kind of imaginative play that kids naturally engage in. It also helps to further develop an array of educational skills, including: math, reading, writing, cooperation, leadership, problem-solving, and creative thinking.

Now you might be thinking to yourself: how is this game actually played? Dungeons and Dragons is a pen and paper fantasy role-playing game that has gone through many iterations. In it, players design characters to roleplay and complete missions and challenges presented by the Dungeon Master, which in this case will be Ellie (a teacher at WACC). The children and their characters will be fighting enemies and solving puzzles along the way. The core of Dungeons and Dragons is story telling. The Dungeon Master and the players tell a story together, guiding the heroes through quests for treasure, battles with deadly foes, daring rescues, courtly intrigue, and much more.
​
RPG took effect in Club 45 during the third week of January and is off to a roaring success. Students are really interested in the fantasy world created by Dungeons and Dragons and the part that they are able to play in this story telling world. Club 45 teachers are finding them looking forward to Tuesday afternoons even more than before! We hope to see the continued success of this RPG Club!

What is a Leader?Club 45 Buzz 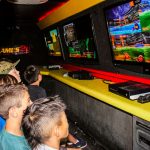 Generation IY: Secrets to Connecting with Today’s Teens and Young Adults in the Digital AgeClub 45 Buzz